What a day! In fact, what a couple of days. Back to back, exceedingly robust equity market rallies.

Wednesday brought with it even more aggressive demand than did Tuesday, and much of the trading volume, which was indeed elevated from Tuesday, was packed into the afternoon, both ahead of and in response to the FOMC announcement. I don’t know this for sure, but the action, late in the regular session, as panic buying appeared to set in, felt at least in some stocks like forced short-covering.

Traders went to work on Wednesday with Asian stocks roaring to the upside, led by Chinese stocks, as Beijing had pledged adjustments in policy that would support economic development and subsequently financial markets. This sudden euphoric move into Chinese names with an intense focus on technology also extended to China-headquartered stocks listed at global exchanges. The KraneShares CSI China Internet ETF ( KWEB) ran 39% for the session on record trading volume.

Beyond China, the world would learn that in Eastern Europe, Ukrainian and Russian delegations had kept talking, both sides offering up positive-sounding snippets ahead of Ukrainian President Volodymyr Zelensky’s virtual address before the combined chambers of Congress. That was enough for U.S. stocks to at least open higher.

The rest of the story tells itself.

While President Zelensky spoke in front of the Congress on Wednesday, the Financial Times was reporting that Russian and Ukrainian negotiators were making progress toward putting together a 15-point peace plan that neither side had yet agreed to. The plan is said to include a cease-fire that would require Ukrainian neutrality (a pledge to forego either NATO or EU membership), and limits on the size of the Ukrainian armed forces once Russian forces exit the country. I did not see specific demands regarding the status of disputed regions such as the Crimean peninsula, an area Russia claims for itself as well as the eastern Ukrainian districts of Donetsk and Luhansk. These two primarily Russian-speaking areas were already in uprising prior to the war, and have been recognized as independent by Moscow.

Obviously, the points that we actually heard about would be tough for the Ukrainian side to swallow as they impinge on Ukrainian sovereignty and require that some territory already taken by force be ceded away. On the battlefield, the Ukrainian military has recently launched a counter-offensive and appears to be doing rather well, as the Russian army has failed to make significant progress or fully achieve what one would think to be any of their primary military objectives. At least four Russian generals have now been killed in action, while there are reports that at least eight others have been sacked by Moscow. The problem has not been the Ukrainian military. The problem is that Russian forces, lacking battlefield success, have targeted civilian infrastructure as well as civilians themselves in what appears to be an effort to spread terror among the populace.

In response, Ukrainian President Zelensky has gone before the legislative bodies of Canada, the U.S. and now Germany requesting a NATO-enforced “no-fly” zone or at least the transfer of old Warsaw Pact fighter planes from nations such as Poland to the Ukrainian Air Force. NATO alliance members, while supplying the Ukrainian military with defensive weapons, have been resistant to taking actions that could be seen as offensive in nature or put NATO pilots in the same air space potentially with Russian pilots.

On Saturday, President Joe Biden signed off on $200M for arms and equipment meant for Ukraine. On Tuesday, Biden signed a $1.5T spending bill that included $800M in security assistance for Ukraine. On Wednesday afternoon, Biden announced that the U.S. would send 9,000 anti-tank missiles (Javelins), 800 anti-aircraft missiles (Stingers), 7,000 small arms, 20M rounds of ammunition, and a longer range anti-aircraft system. That last one becomes necessary as Stingers are older, out of production, and cannot reach aircraft flying at higher altitudes. The U.S. will also send 100 lightweight, single-use, infantry-deployed drones known as “Switchblades,” and not the larger Predators or Reapers that can target both tanks and artillery.

As readers know, because we have covered it here, the Javelin is a collaborative Lockheed Martin ( LMT) /Raytheon ( RTX) manufactured product. The older Stingers were designed by General Dynamics ( GD) and most recently manufactured by Raytheon and under license by Airbus ( EADSY) in Europe. However, the Stinger is out of production. Producing more would be an undertaking. The Switchblade is manufactured by AeroVironment ( AVAV) . The Predator and the Reaper are both manufactured by General Atomics, which is a private company.

Note: I have reduced my portfolio exposure to defense contractors this week from peak levels back toward something closer to what is my normal.

The official statement has changed considerably. First, “job gains” have moved from “solid” to “strong.” Second, the entire paragraph concerning Covid has been removed and replaced by the mention of the war in Europe as a threat against economic activity. The pandemic is not mentioned at all.

The FOMC, as all know by now, has decided to move the target range for the fed funds rate from 0%-0.25% up to 0.25%-0.5%, and key here… “anticipates that ongoing increases in the target range will be appropriate.” The statement adds… “… the Committee expects to begin reducing its holdings of Treasury securities and agency debt and agency mortgage-backed securities at a coming meeting.” Readers well know that I believe that adding mortgage-backed securities to the balance sheet for the past year-plus was the most glaring error made by the Fed coming out of the pandemic era.

I get the easy money, and the foot dragging on addressing inflation. I can see how those decisions were made. Supporting a market that long since needed no support only unnecessarily increased the size of the balance sheet, increased the size of the monetary base, and presents an unnecessary risk. I have been accused of going easy on this Fed. Here is one area where I will not. I would prefer that the balance sheet unwind focus more heavily on MBS than on Treasury holdings, as central bank participation in MBS markets should only happen under crisis management-type circumstances. The Committee vote to increase this overnight rate was unanimous, with St. Louis Fed Pres. James Bullard voting for a 50 basis point hike rather than 25.

The Committee, as interpreted through the group’s median projections, currently expects the U.S. economy to grow some 2.8% this year, which is down from a 4.0% projection just three months ago. The expectation for the unemployment rate has held steady at 3.5%. Expectations for 2022 PCE inflation are currently for 4.3% growth at the headline and 4.1% growth at the core. Both numbers are up significantly from three months ago. The Fed sees the FFR at 1.9% by year’s end, implying another six rate hikes.

Going out to 2023, Fed officials see the fed funds rate at 2.8%, while economic growth drops to 2.2%, and inflation moves toward 2.7% at the headline and 2.6% at the core. Now, understand that the Fed is notoriously inaccurate in making these projections, which is a good thing. For if what these officials project comes to pass, real interest rates will go positive in 2023 as economic growth slows (but somehow, labor markets remain magically impervious). Obviously, these conditions will impact labor market demand, which would force downward pressure on that GDP expectation, and subsequently, the fed funds rate. Just sayin’.

Chess is a far more interesting game than checkers. These kids really should try it.

Equity markets roared, in what was likely a face-ripping short cover. We said that, and we’ll get back to it. Treasury markets were active as well.

Plainly, despite the above mentioned interest rate hikes, Treasury markets are responding more to the likely coming of pressured economic conditions as soon as next year, mentioned in my observation, but borne of the Fed’s own sloppy expectations.

Where do I begin?

Breadth for the session was outstanding. Winners beat losers at the NYSE by almost 4 to 1, and at the Nasdaq by roughly the same margin. Advancing volume took a stunning 84% share of aggregate NYSE-listed trading volume and an incredible 88.3% share of Nasdaq-listed trading. Aggregate trading volume increased significantly on Wednesday from Tuesday for NYSE-listed and for Nasdaq-listed names, as well as for both S&P 500 constituent and Nasdaq Composite constituents names.

While there is no doubt that professional money participated heavily on Wednesday, the percentage of these trades that were simply price insensitive, short interest covering, risk removal trades is unknown at this time. My hunch (opinion) is that it was substantial, meaning that the carry through could be less than impressive.

The stock took down its 21-day EMA and 200-day simple moving average (SMA) on Wednesday, while flirting with its 50-day SMA.

How much can the stock hold on to? I have been building my NVDA long back toward a more elevated level of exposure. Support here has been tested on four occasions and has built an impressive volume shelf. 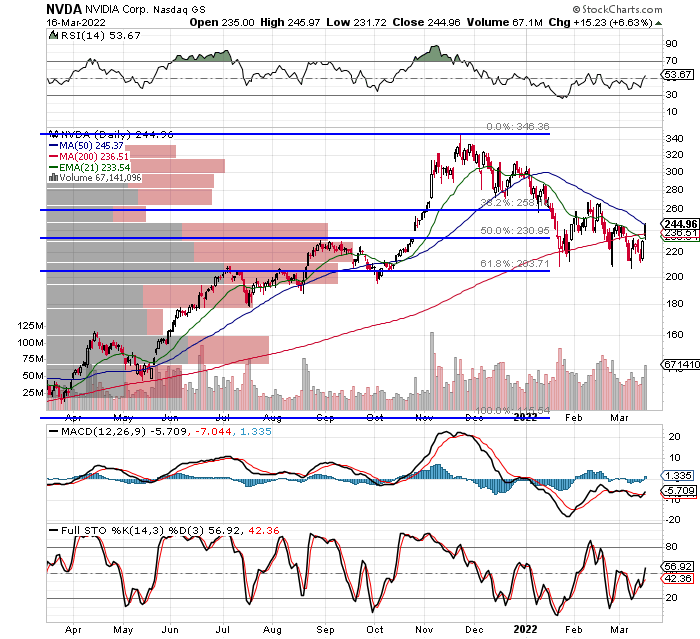 The stock is currently coming off of support at a 61.8% retracement of the March 2021 through December 2021 rally. This stock has also retaken its 21-day EMA and 200-day SMA.

I have re-initiated a long position in this name after getting out earlier this winter (nice trade, Sarge). One caution here: the volume shelf is lower and does not correlate to where recent support has been found. 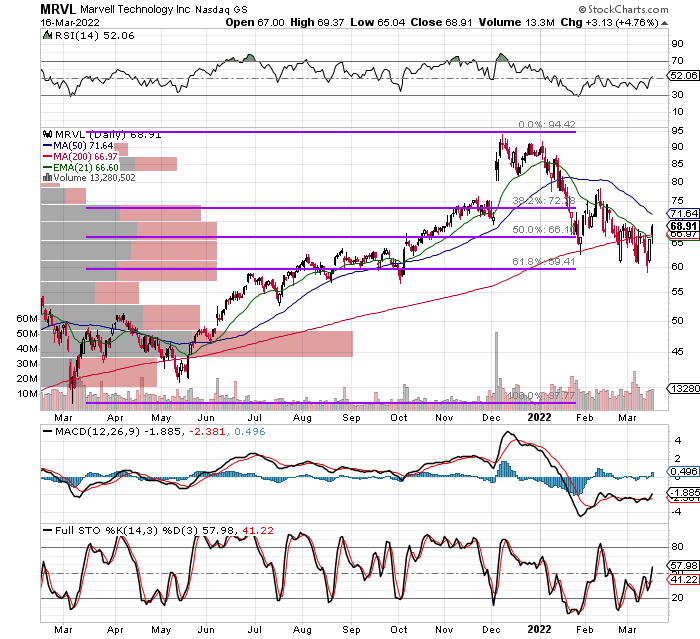 Note: I have held my fire on adding to Advanced Micro Devices ( AMD) of late, as that name has hit resistance at the 200-day SMA. AMD remains a core position, just at reduced size… for now.

The Fed (All Times Eastern)

Get an email alert each time I write an article for Real Money. Click the “+Follow” next to my byline to this article.